When Reed is sent to a secret reeducation center for teens in the middle of the Dirt, he doesn’t expect friendship — not with Xoey, the fragile girl who arrives with him. Not with Adam, the brooding boy who has been here longer than anyone. But especially not with Riley, a girl he knew in the Sand who has every reason to hate him.
But then Reed and his friends stumble across a stash of hidden books in tunnels under the school. They learn a different perspective about the last days of America and the second civil war that ended with the formation of the United Democratic Republic.
Starved, enslaved, and tortured by their sadistic school director, the group of friends find hope in each other, and risk everything in a desperate plot to steal back their liberty before it’s too late. 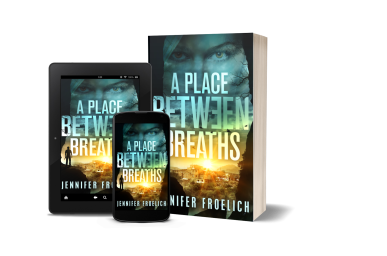 A PLACE BETWEEN BREATHS

WINNER, Writer’s Digest 23rd Annual Self-Publishing Competition, Honorable Mention for Genre Fiction…
When FBI Agent Rachel Mueller flies to Mexico’s Copper Canyon to recover the body of a missing American college student, she’s partnered with Mexican federal agent Marius Suarez, a man she knew and loved years ago when he used an alias and worked undercover for the DEA.
Working together while trying to sort out their troubled past, Rachel and Marius discover evidence of more murders – all committed by a man who sees himself as the reincarnate Tezcatlipoca, Aztec god of deception. As their investigation becomes complicated by corruption on both sides of the border, their renewed trust for each other is strained.
Racing against a timetable that matches the Aztec calendar, their investigation leads them back through the myth of the gods, the crumbling streets of Juarez and into the deepest corners of the Copper Canyon. When the killer kidnaps his next victim, Rachel and Marius are forced to make their own choice: protect their growing love for each other, or sacrifice everything for the greatest love of all.

A Place Between Breaths is available in paperback and Kindle/KU.

HER DREAMS KEEP DRAWING HER BACK TO HIM…
Bay-area dressmaker Erynne O’Keefe begins dreaming about a handsome stranger shortly after her mother’s suicide. At night they walk along a damp street until the light of morning pulls her back to reality. Practical and guarded, Erynne would like to dismiss her dreams as evidence of grief. Remembering her mother’s life-long struggle with strange dreams and nightmares, she fears they point to hereditary mental illness. Erynne begins searching for answers while trying to resist her growing feelings for the stranger.
But the man in Erynne’s dreams is quite real, living in Arizona and wondering why his nights are filled with dreams of a pretty stranger. Stubbornly resistant to commitments, Colin Green can’t believe he has become smitten with a figment of his imagination. And his dreams always come with a persistent warning: Protect her. But how can he protect a dream? While Erynne and Colin move closer to finding each other, their dreams turn to nightmares as an unlikely foe becomes determined to keep them apart.

Dream of Me is available in paperback and Kindle/KU.

(Currently out of print)

When Reed Paine is sent to a secret detention school for teens whose parents are branded enemies of the state, he doesn’t expect to find friendship – especially after coming face to face with Riley Paca, a girl who has every reason to hate him.
But when Reed, Riley and a few others start reading the old books they find in tunnels under the school, they begin to question what they are taught about the last days of America and the government that has risen in its place.
Then the government decides to sell the Liberty Bell and Reed and his friends risk everything to steal it – to take back their history and the liberty that has been stolen from them.

Stealing Liberty is available in Audible.

(Currently out of print)

Reed Paine thought stealing the Liberty Bell and escaping from Windmill Bay would be his end game, but he never intended to leave two friends behind. When he and Riley decide to search for her sister instead of returning for their friends, they face mounting guilt over their decision, along with dangers they never imagined in the Red Zone.

Xoey Stone is determined to rescue Oliver, even though it means returning to the school that still haunts her dreams. But when she’s confronted with more than one demon from her past, her faith begins to waiver and she makes a bold move – one that will take her back to the Sand and bring her face to face with Director Kino.